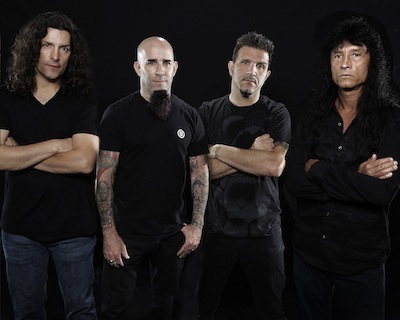 The legacy of Anthrax....I’ve always credited them with creating the term “mosh” or at the very least they were the one’s who brought the term to the metal world back in the early 80’s.

The band’s latest release is a concert dvd which captures Antrhax live in Chile. I was curious why the band chose Chile; watching the dvd you realize they chose that destination because shows there are no holds barred and anything goes!

When “Among The Living” starts you see a giant flame in the middle of the crowd which turns out to be a rabid fan waving a flare around! I am being dead serious when I tell you that the fans in Chile bring flares into the crowd & wave actual flair flames in the pit! Scott commented during the audio portion of the dvd that he was afraid the flares would be tossed onstage and then joked that maybe there was a car broken down in the pit?

Jonathan from Shadow’s Fall handles all lead guitar duty on this dvd but sadly the camera men focus more on Scott & Joey and they leave Jonathan out of most scenes.

The band joked that they knew production and crew would be below standards if they filmed in Chile BUT they chose Chile because the fans are crazy there and things like a flair in the crowd would never fly in the States.

Randomly inserted throughout the film are clips of the band offstage, performing clinics, and doing interviews. Eddie Trunk, Zakk Wylde, Phil Anselmo, and David Ellefson are featured in those clips and to my surprise former guitarist Rob G. was also featured as well.

An S.O.D. cover is performed but unlisted and at the end of the AC/DC classic “TNT” there’s a nice little surprise. Watch closely and you’ll also see a Slayer cover!

“I’m The Man” surprised me because in years past Joey would play drums and Charlie would rap with Scott and Frankie....on this dvd Charlie plays drums which forces Joey to leave the stage or dance around in the background since he’s not needed for that song.

“Antisocial” closes the disc nicely and if you watch past the credits there is a little extra footage of the band clowning around offstage.

Overall this is a great live concert dvd but some of the production is a tad lackluster right down to the artwork which is minimal at best. The footage of Anthrax on the Big 4 dvd was much better in my opinion.

Check out the official Trailer for this dvd at: https://www.youtube.com/watch?v=utFoyZLPHvQ&feature=youtu.be

When Billy and the boys take the stage you know you’re in for one hell of a ride! That little old band from Texas is still going strong in 2014 with a new dvd on shelves which captures the bands set from the 2013 Montreux Jazz Fest.

“Got Me Under Pressure” starts the concert off proper and watching the 3 members of ZZ Top onstage you can’t help but think, “Wow, these 3 dudes make all that noise onstage while the younger generation needs 5 members & a slew of backing tracks to fill the sound!”

With the long beards it’s truly hard to see the aging process on Billy & Dusty while Frank keeps his drum beats right in the pocket with simply yet effective rhythm.

“Foxey Lady” became a staple to the bands live set over the last year or so and Billy plays it differently than Hendrix did which adds a little Texas Blues flavor! Musically ZZ Top has never sounded better and the band are a living, breathing testament to just how powerful the blues truly are!

“La Grange” and “Tush” close out the show and I won’t lie....that’s the best part of the show because those 2 songs still kick so much ass!