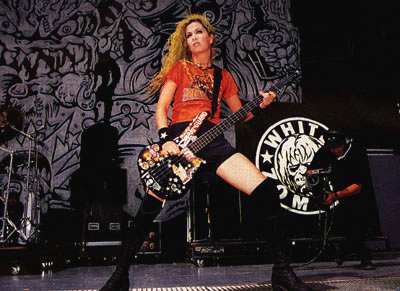 "How To Make A Monster...An Interview with Sean Yseult

Sean's father is Michael S. Reynolds who is a noted biographer of Ernest Hemingway & her childhood was an interesting exploration of culture, art & experiencing life as a freak. Sean recently put out a book entitled, "I'm In The Band" which is a joke title simply because many people didn't believe she was a member of a heavy metal band based strictly on the fact that in the 90's there were few if any females in metal bands.

Sean gained the respect of the metal world due to her musical prowess & her onstage energy and I recently had the opportunity to interview Sean about all things White Zombie both past & present; Sean was very open, very pleasant & very candid.

Rock N Roll Experience: "Why did you decide to release a book at this point in your life because your still young & will have more to tell as time goes on."

Sean: I guess I could have put it out later (laughs), I had to dig through all my things in storage when I moved to New Orleans when White Zombie broke up & I just had everything in storage & I never looked at it all & just 2 years ago our management was putting together a box set of White Zombie stuff & they asked for some things out of my storage & I started digging through there & I just kinda stumbled across all these amazing photo albums & great tour diaries & all kinds of stuff it just kinda brought back this whole era that is so lost right now & it was just amazing, so it was just way to much to just contribute just a few things to the box set so I decided that I needed to atleast put my photos into a photo book or something & do something with that (laughs) and that's pretty much what happened.


Rock N Roll Experience: I thought it was lame that you & J. had no involvement with the White Zombie box set.

Sean: Yeah, I sent them some VHS's & J. and I were both getting stuff together and next thing you know we were sent some proofs of, "here it is, it's done!" & there was all kinds of mistakes on it, lack of credit to photographers and friends and band members and I was trying to make corrections and they were like, "Oh, it's already being printed." (laughs) It was a little bit of a fuck you to me & J. which was kinda weird since we were 2/3rd's of the band but anyways...(laughs)

Sean: No, you know, right when White Zombie broke up and Rob went solo our manager actually asked us to do that...as far as a new band though we never really talked about that, but our manager tried to keep us (Sean & J.) doing White Zombie and just get a new singer & I wasn't into that....I don't think fans are into that & I don't care for when a band gets together with a new singer (laughs), I love J. like a brother & we've worked together, he's a great producer & I've worked with him over the years since White Zombie broke up but no, we don't really talk about playing in a band together (laughs)


Rock N Roll Experience: I've always though you should play with Zombie's old guitarist's band, SCUM OF THE EARTH.

Sean: I haven't seen them, I'll have to check them out.

Rock N Roll Experience: How did you and Danny Nordahl hook up?

Sean: I was good friends with a girl named Brijette who had a band called New York Loose & we had been friends in the East Village & she had moved out to London for a little while & she had somebody producing them & working with them in London and she invited me to come and visit & I went out there and Danny was her bass player at the time so that's how we met, I was out there with Brijette for a couple of weeks & we met out there and we ended up dating for a couple of years...great guy.

Sean: Yeah...he's great, it seems like he's got a great little family there.

Sean: I think that is why we are not together now...that was never a thought in either one of our heads...we were so young when we met & I guess some people are more traditional in the way they think of marriage, but I really never thought I'd get married in my whole life, I never planned on it and if you notice, both of us have gotten married in our later years (laughs) & it's nothing that's important, I don't need a paper to say I'm in a relationship, ya know? (laughs) It was never an issue to me & it was never an issue to Rob either, we were just together...we were together 24/7 a day so it didn't really seem like an issue....our lives were very underground culture & that was something very normal to do, to get married, & we didn't want to do the things that normal people do (laughs)

Sean: Well, she was a fan (laughs), she made it backstage that first night...enough said, I don't want to do any name calling (laughs)

Rock N Roll Experience: When you & Rob split wasn't it tough to be around Rob & his new girlfriend after you & him were a couple for so many years?

Sean: It was a little rough, yeah, definitely. It wasn't fun for him when I was dating other people as well, but when we split up we both said we wouldn't throw it in each others faces but it's kinda hard when you're on a tour bus together on a tour moving from one town to the next all crammed together...yeah, it was....the difference was that I didn't insist that Al Jourgenson or whomever I was dating at the time, I didn't insist that they come out the entire tour the whole time like he (Rob) did to us & that was rough on the other member of the band too...it's kinda hard having another body around, there's not that much room & it's kinda weird for dynamics.


Rock N Roll Experience: Did you date Twiggy Ramirez at one point?

Sean: We did (laughs)...I don't know if you call it dating, we were friends and hooked up, ya know? (laughs) We hung out for a while, it was kinda crazy, but our bands were on tour alot at that time (laughs)


Rock N Roll Experience: It's funny that you mentioned the story about Gidget Gein from Marilyn Manson busting his head open at a show White Zombie played on because Gidget had told me that story when I interviewed him a few years ago.

Sean: That's funny...those guys were great, I had so much fun with Marilyn Manson & it's ashame we never toured together....they kept going, "Take us on tour!" but look at them now, they didn't need our help! (laughs) They did pretty good on their own! I wanted to take them out though, that would have been fun!

HERE'S AN EXCERPT FROM MY INTERVIEW WITH GIDGET GEIN WHERE HE RECALLS THE WHITE ZOMBIE SHOW:

Rock N Roll Experience: I saw Lady Gaga's live show recently & she has a live rock band that backs her, would you ever consider joining the live backing band for Lady Gaga?

Sean: God, you know....that's a good question....I don't know, it depends on; I wouldn't just do it for the job, & I have to be honest, I don't really know any of her music, so I'd have to hear the music & see if I could handle it (laughs), I'm not typically a fan of dance or pop music, but I do have alot of respect for her for being a freak & I love that she just f**king goes to the most extreme of anything she can do & it just kinda reminds me of our Early East Village days & everybody was kinda doing their own thing & being freaks, so....(laughs) I do have alot of respect for her on that level & like I said, I'd have to hear her music but I wouldn't just do it as a job.


Rock N Roll Experience: I saw Rob Zombie on Extreme Home Makeover a few months back & my first though was, "Wow, Rob's really selling out!", did you see that TV show & do you feel the same way because when White Zombie started it was satan & 666 whereas now Rob's on a TV channel owned by Disney.

Sean: I didn't see that. (laughs) I don't know, maybe he's getting ready to have some kids or something (laughs) going down the Disney way! (laughs)

Sean: Yeah, there's a few songs, not much though, just from the early days there's a couple of songs but nothing you I can really remember, just a track or 2 that didn't make the record. There's not a great vault of (laughs) lost gems or anything like that (laughs)


I'd like to thank Sean for taking the time to chat with me & definitely check out her new book, "I'm with the band" which is a fun read on the history of White Zombie with tons o' never before seen pics!